Phuket is composed a variety of ethnic communities including: Thais, Chinese, Malays, Indians, Nepalese and a unique mix of Hokkien Chinese and Thais locally referred to as Baba (Peranakan).  The unique culture of the Babas is still evident in the architecture, commerce, dress and way of life in Phuket’s Old Town.

From the 17th century, Phuket developed strong commercial, educational and cultural links with Penang and the British Straits Settlements of Malaya as a result of tin mining.  During the reign of Rama V (1853 – 1910), Phuket became the administrative center for the tin-producing southern Thai provinces.  The Chinese tin mining barons found it was more convenient to ship tin ore to Penang  for smelting rather than transporting it to Bangkok. They sent their children to school in Penang for the same reason.  On their return journeys, they brought back architects, carpenters, artisans and  building materials from British-constructed Penang to design, construct and decorate their lavish mansions and intricate shophouse fronts, often highlighted with intricate Chinese fretwork.

The beginning of the tin boom in the 19th century led to construction of many splendid mansions and shops that are still well preserved in the old part of Phuket. The architectural style, typical of the region, is often described as Sino-Portuguese owing to the strongly Mediterranean character.  This is a misnomer as these buildings are not influenced by the Portuguese at all but are similar to those found in Penang with the blend of Chinese architectural features and colonial making it more appropriate to use the term Sino-Colonial architecture. More about the Chinese shophouse:

The shop-house was a place for a family to both live and do business, using the front of the building for trading and the remainder, including the upper floor, as their private home. Businesses in those days included banks, general stores and tin mining offices. Shop-houses are usually found built in rows, giving rise to the Hokkien Chinese term tiam choo, meaning a row of shop-houses.

The floor plans of all these shop-houses are very similar: five metres wide but as much as 50 metres long, creating a very spacious living space for an entire family. Across the front of each, along the edge of the street, is an arcade, offering shade and shelter to the public. (These covered arcades or archways, called noh kaa kee in Hokkien dialect,  join the shops together). Behind this, the house is usually divided into four parts. 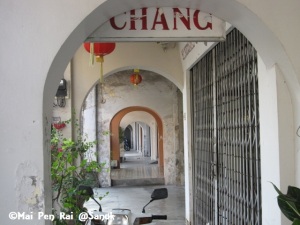 There is a living room for general purposes and for receiving guests, followed by a space, open to the sky, with a well. At the rear is the kitchen. Upstairs is the family’s private area and bedrooms. In the old days, the central open area was often the heart of the house. It was here that you would find the women of the house chatting while cooking or doing the washing. It was also, in a sense, the lungs of the house, allowing air to flow through, even in the hottest month, April, when temperatures in Phuket can rise to 38 degrees C. Also contributing to the cool atmosphere were the thick, solidly-built walls. Source: Phuket.com

The most lavish and celebrated angmor-lao (‘red-haired’ or ‘foreign mansion’) residence in Phuket Town is Phra Phitak Chyn Pracha Mansion at No. 9 Krabi Road. This grand angmor lao was owned by a Phuket born Chinese mining tycoon. After lying vacant for many years, it became a meeting place during the time of King Rama V and VI. The surreal setting with its Doric styling with three sets of archways is now under lease to the Blue Elephant Cooking School & Royal Thai Cuisine.

The core of Phuket Old Town is primarily made up of five roads and several sois (small streets or lanes). The main roads are Rasada Rd, Phang Nga Rd, Thalang Rd, Dibuk Rd, and Krabi Rd. My photos of the shophouses in the former red light district on Soi Rommani can be found here while the remaining buildings can be seen in the slide gallery below. These photos were taken in March 2011.

Sanuk! Sanuk is now on Facebook. Join us for the latest blog updates and a whole lot more!